Towards a Nutritional Assessment for Crimean Soldiers How well-fed were Allied soldiers in the Crimea? Stories abound of  British soldiers subsiting on coffee, salt pork and biscuit, resulting in a high rate of mortality and sickness (usually bowel complaints and scorbutic fever) whilst their French counterparts were "fit and healthy." But were they?

The average sedantary male requires 2,000 calories per day, whilst a male who exercises vigorously for 60minutes per day requires 2,500 calories. Modern British army 24-hour ration packs, used by soldiers on active service, have 4,000 calories. Late 19th century studies suggested a figure of around 4,000 calories for an active manual labourer, as shown in the following table.Yet, despite this, most soldiers received approximately half the calorific input required.


The British army ration in 1854 consisted of:

This ration provided:  Protein, 154g; Fat, 31g; Carbohydrate, 457g. Total calories 2,793; and for a man of 11 stone gives 40 calories and 2.2 grammes of protein per kilogramme. This ration was much lower in caloric value than the 4,000 calories for men undergoing severe exertion, and was especially deficient in lipids.


The French ration consisted of:

This would provide :
Protein, 129g; Fat, 69g; Carbohydrate, 440g; Calories, 2,956.
For a man of 10 stone this is 46 calories and 2 grammes of protein per kilogramme. For a man of 11 stone the figures are 42 and 1.8 respectively. Crucially, the French rations had vegetables in them (British soldiers were meant to provide vegetables out of their own pay) which would have lowered the presence of diseases such as scurvy, but this is not borne out from contemporary literature, especially during the winter 1855-1856 when scurvy was the biggest killer of French soldiers due to a complete absence of vegetables in the diety.

The following ration was that used by French soldiers in the trenches during the siege of Paris (1870-71) and was, presumably, very similar to that of French soldiers on active service in the Crimea, rather than the "text book" theory (above).

This diet, owing to the scarcity of food, was lower in protein and fat than advisable for men undergoing hard exercise.

The theoretical rations of French and British soldiers were similar in their calorific content (British 2,793; French 2,956) the British having a  higher proportion of carbohydrate and protein compared to the French. French campaign ration, however, was predominantly carbohydrate, from bread, biscuit and alcohol. Whilst this would have prevent soldiers from feeling hungry, it failed to meet protein requirements and a lack of vegetables would have promoted scurvy and lowered immune systems.

Also important in understanding the nutritional status of a soldier is when they ate. The British army traditionally ate twice a day: Breakfast was around 10am and Dinner around 12-noon; the former was usuaully bread and coffee whislt the latter was boiled beef or mutton served with boiled potatoes or boiled cabbage. Thus, in barracks, British soldiers were eating one large meal per day. On campaign Breakfast was usually around 7am, but from most letters British soldiers ate once per day after they had finished their duties, either in the trenches, on picket, defaulters etc.

French soldiers also traditinally ate twice a day - Breakfast at 10am was usually some form of broth or vegetable soup with bread coffee and/or brandy whilster Dinner was served around 5pm and was a meat soup which  might have been thickened with flour to make a beef stew. A report commissioned by Napoleon III ,  from 1849 - 1851, drew the same conlcusion as that commissioned by Marechal Soult ten years before: a soldiers' diet was monotonous and unhealthy and the "monotonous soup" was the prime reason why conscripts failed to re-enlist after their initial five-year conscription was "up". Furthermore, many young conscripts often starved or were severely malnourished due to the unexpected meal times and poor quality of the food.

In a letter to his sister, Lieutenant-Colonel Sir John Yorke of the  1st Royal Dragoons describes his commanding officer, Lord Lucan as "hot-headed" and a "nit-wit" and predicts that something "serious" will occur from his "want of temper and judgement" three days before the Battle of Balaklava. In previous letters, Yorke extolled the virtues of General Scarlett ("we like him and he likes us: we are a United Brigade of Heavies") and also damned the Earl of Cardigan as "the greatest of Swells". Make of the letter what you will, but Lucan's actions at Balaklava in not questioning the orders given to him and then 1. trying to take all the praise for the Charge of the Heavy Brigade and 2. trying to lay the blame on everyone and anyone for the disaster of the Light Brigade charge does rather marry-up with this description of Lucan.

'Our next misfortune is Lord Lucan. When there is the least appearance of alarm he being excited to madness, and abuses everybody, and in the most uncourteous [sic] manner. The last night he sent round an A.D.C. to say we were to remain stationary during the night, and, as if the doubted our obedience to his orders his message added that (in the presence of the men) that he would send any officer home under arrest who left his post as well as the Commanding Officer who permitted it. Poor General Scarlett can do nothing got his Brigade – Lord L. by nature opposed everything he does not think of himself and we are consequently fearing his want of temper and judgement should anything serious occur. He is known to do something and then throw the blame on others. He is very unfit man to Command such a Brigade; a hot-headed, nit-wit, Irish man. I believe he shines on the Bench at Castlebar as he can put down the Almighty.'

Posted by AnthonyD at 12:49 No comments:

Winter in the Crimea 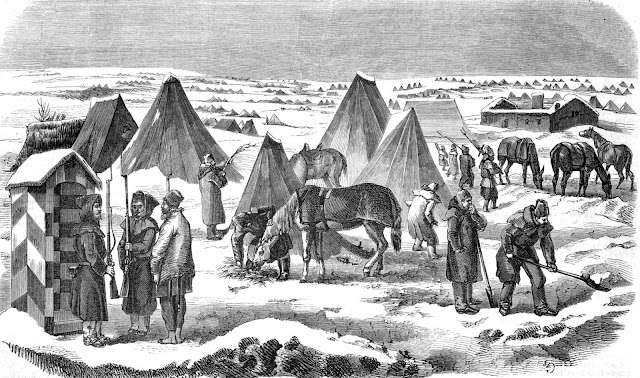 That, under the conditions where we are, our soldiers are perfect heroes, perfectly gay, would be too great an exaggeration, but I can assure you, however, they have all the gaiety and enthusiasm that they can in the circumstances. The good words [bon mots], the jokes are not entirely prohibited, and in the French soldier is like the thermometer of his moral state.But we must admit, it is far from our camp to look sorry at this moment: in movement, it offers animation in the good day [beaux jours]. Our tents are half hidden in the snow, and the small shelters of our soldiers seem more than points on the surface of the ground, and smoke floats  away agaisnt the bluish gray of the sky. This is because wood is scarce on our poor plateau [of the]Chersonese, and that to pick up a few small bundles of twigs  our men use almost a whole day.

Three sketches from the 2e Zouaves 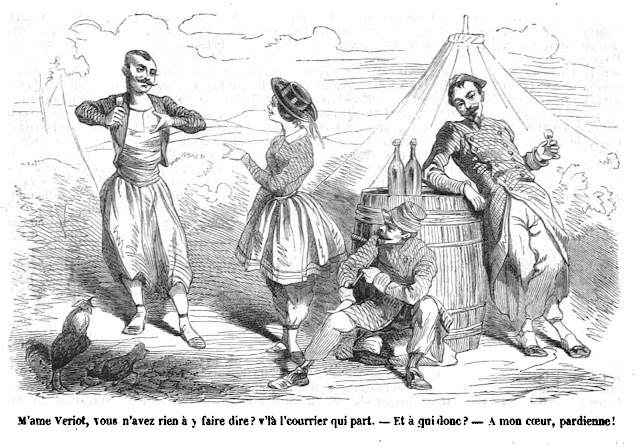 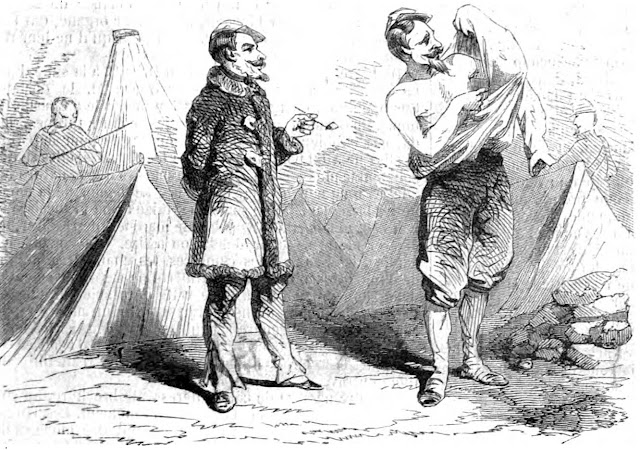 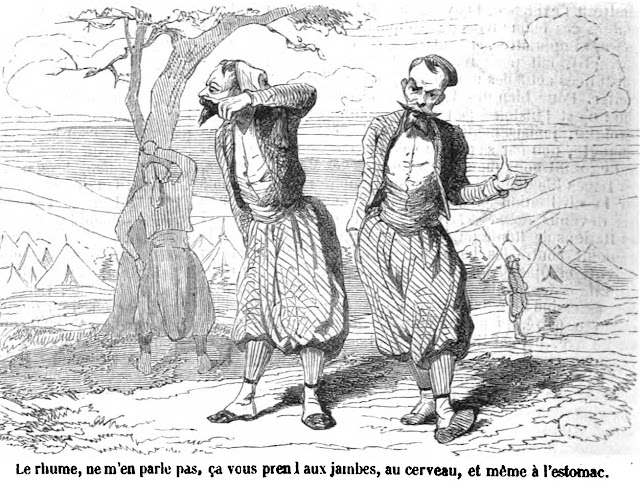 Enjoying some time off-duty.
Posted by AnthonyD at 09:58 1 comment:

These are some of the sketches sent home by French officers and soldiers during the Crimean War to their families, showing in detail their daily lives. 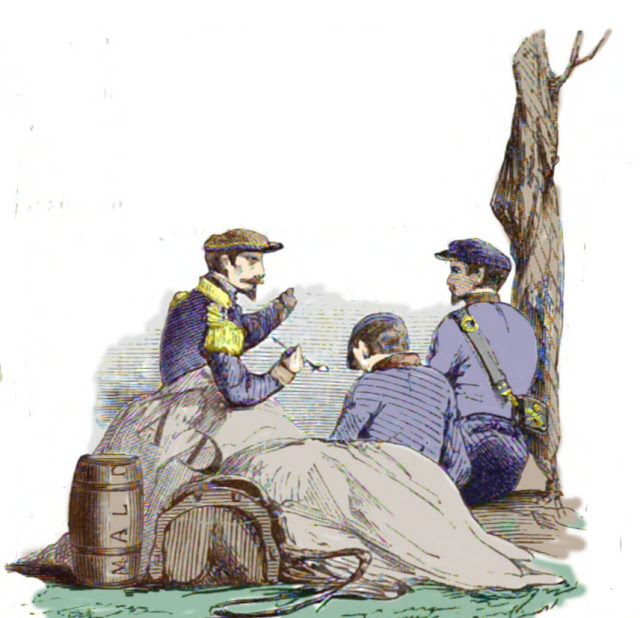 A convivial party of French officers; the seated figure on the right is an Artillery Officer - you can just make out the crossed cannons on his giberne.
Read more »
Posted by AnthonyD at 09:43 No comments: